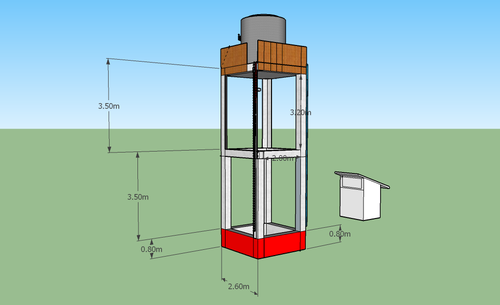 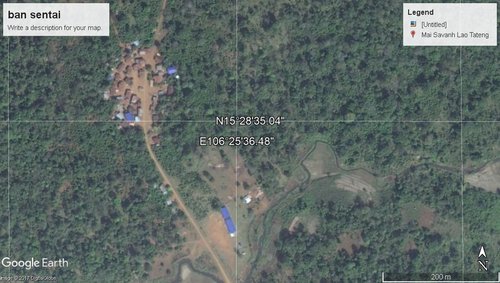 Ban Sentai Village is one of the poorest Village in Thateng, Sekong Province which has no direct Water Access. About 60 Families are inhabiting the Village and mainly from Alak Tribal People Group which is a minority people group. They practice hunting and relying their sustenance from traditional agriculture like rice, root crops, and forest plants. Water System structure composed of Water tank is the goal for 30 working days with the desired procedures and actions should be taken. Saturday and Sundays were considered rest days. People take turns on attending the work schedule due to the demand in the farm work like attending newly planted rice and maintaining its irrigation. Nevertheless, Villagers were adamant to finish the said project. Water for all is the goal. 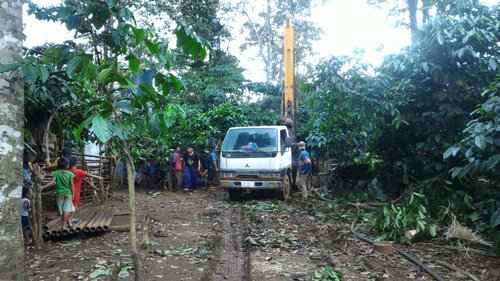 Picture 3 : Bore holing works after site has been identified

Locating the possible water source for bore holing action and perimeter cleaning. Villagers were enthusiastic about the action. Bore holing usually takes about a day. Result of Bore holing was 59 meters depth, water level of 8 meters and 20 liters per second flow rate. After this, Village meeting as usual for the Villager’s engagement on building the Water System. Men, Women and Youth are encouraged to participate.

Accomplished digging of Concrete footing with a depth of 85 cm by 30 cm. Procedures involved are traditional digging skills using Shovels and Digging spears. About 40 people were involved and resulted to easily accomplished task. People were proud of their community participation.

Accomplished Steel Frame footing of Water System which was done by bending of steel rings and cutting of steels using common saw. Due to a lot of people involved it was easily accomplished with strict supervision on measurement and over-lapping of steels. Since concrete making is not common, steel work lectures are needed. After tying of wires to the steel rings to structure the steel frame, it was now carried into the dug canal ready for concrete laying. Overall, easily accomplished and motivated. (21 august) 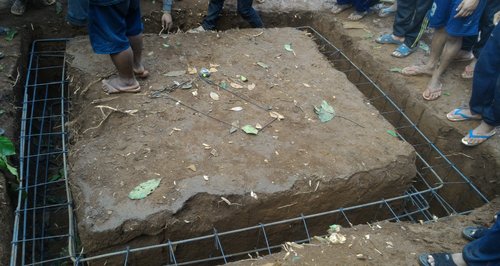 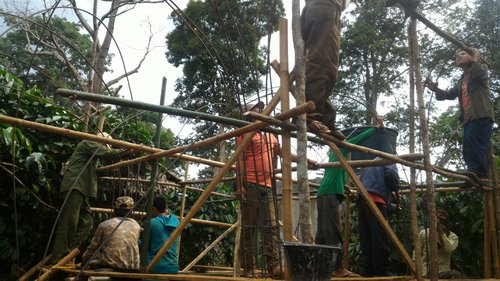 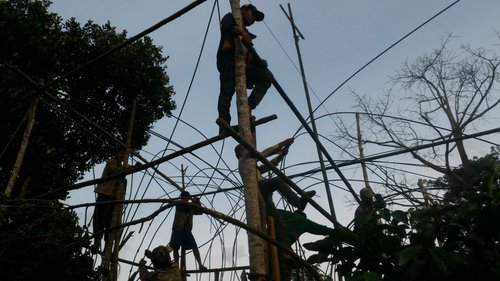 Accomplished laying of concrete cement with a standard of 1:2:3 cement mix. The same number of people involved and needs to have close supervision on actual cement mixing and technical concrete laying. Easily done in a day. Proper vibrating and curing was observed and hydrating of concrete is encouraged to obtain standard result. (22 august) 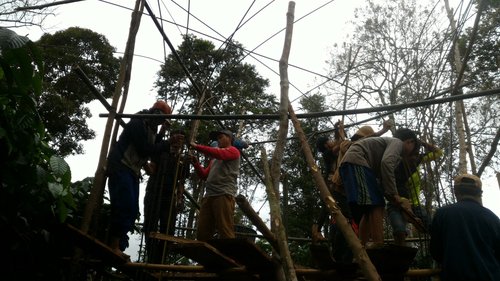 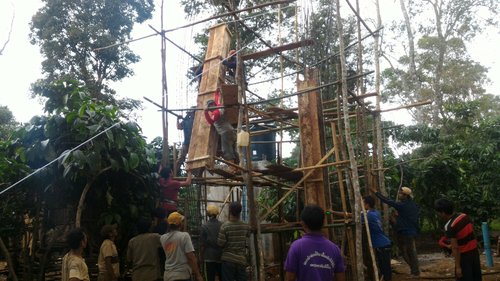 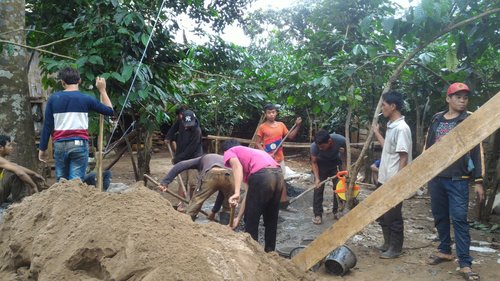 The next day while curing is taking place; columnar rings are being prepared. Villagers easily accomplished cutting and bending of steel rings and tie wires for tying.

Accomplished laying of fresh concrete for columnar post. Men and youth takes part easily even though it is a hard work for four posts with 30 cm square size. Yet, people persevere to fetch water at the closest river and hauling sand, cement, and gravel. Tired but happy fulfillment were felt by the villagers despite the tremendous hard work. (25 August) 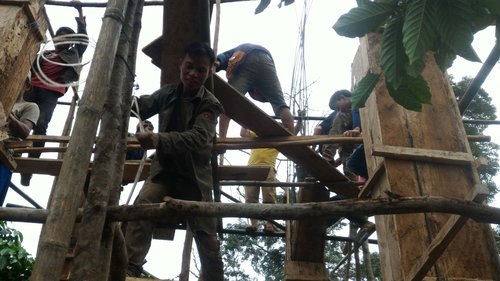 Week 2 was the introduction of Hard Labor but people were still motivated despite. Hauling of materials of sand, cement, and gravel was the difficult part and continuous carrying of chain of cement pails were observed. Boiled water for safety drinking was always available too.

Two days off was rendered to the Villagers started 28th and 29th to at least complete proper curing and rest for the exhausted villagers.

After 4 days of curing, Wood casings were taken out. The columnar post was done good except with some slight holes but was repaired by plastering it with cement to attain standard criteria. We need to start again with the Tie Beam. On this, rings were shaped and some proper over-lapped distance for the extension iron was observed. Again, proper wire tying is done. (August 30)

Accomplished our tie beam concrete pouring. Again, water from the nearest river was hauled. Cement, Sand and Gravel was hauled for easier operation of Mixing cement. This time swapping of men take turns to mix cement due to its tedious act but nevertheless all are willing to take part. Also, each take turns to transport cement to the elevated tie beam. Over all, hard but satisfying. Great thanks for the scaffolding team for sturdy lay out. (August 31) 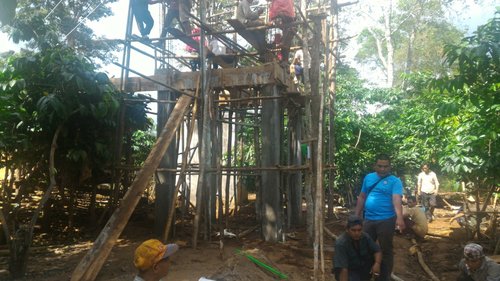 Accomplished second floor columnar post steel frame and wood casing. On here, supervision is less compared of what was done in the first-floor plan. Yet, technicalities should be observed promptly like distance of rings and proper tying of rings. Wood casing should be checked strictly to prevent leakage. (September 1)

Week 3 projects the half way of the steel structure. Everybody eagers to accomplish such due to the terrible experience of no water service. Yet, it’s not yet done completely. Needs more.

Accomplished pouring of fresh concrete for second-floor. Again, water from the nearest river was hauled. Cement, Sand and Gravel was hauled for easier operation of Mixing cement. This time swapping of men take turns to mix cement due to its tedious act but nevertheless all are willing to take part. Also, each take turns to transport cement to the elevated posts. This time, height was not much an issue du 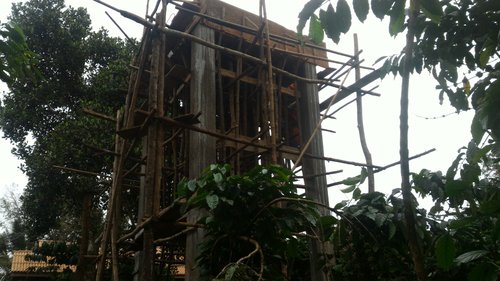 e to the villagers’ willingness to assist each one especially keeping necessary actions such as timely hammering and vibrating of cement to attain good result. But cautious safety still needs to be observed. This week was concentrated only for this second-floor due to curing time of at least 5 days. (September 4)

Accomplished Tie Beam concrete pouring with the aid of 40 people usually men due to difficulty at the top of the structure for safety reasons. (September 11) 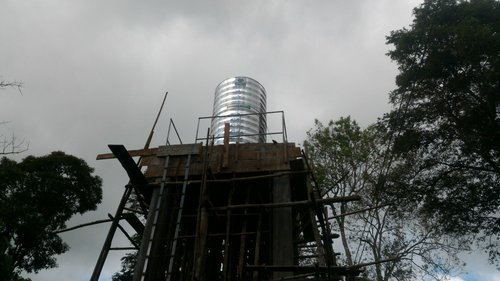 Accomplished lifting of water tank (5,000 liters). No words can describe the original manpower of Alak tribe in doing this. Muscles are stretched. Help from each one is significant. No Boom Truck or any lifting device but pure manpower. Heads up to the Villagers despite the rain! (September 14)

Installation of iron fence at the top for securing the water tank above and installing iron ladder for access of water tank in case of maintenance and repair. Happy and breathing in and out from the villagers are felt. (September 15).

This time 90 % is done: there is still the PVC pipe system to be created, connecting each household with the water tank. The villagers are responsible for this part and they still need to collect the money. They estimate that everything would be finished during November.

Many thanks to BASAID who is involved in funding matérial for this projet.